This Box examines the management of budgetary control instruments by the Ministry of Finance in 2017. Although the figures are in public accounts they are treated similarly in national accounts.

Budget retentions are the retaining of part of a central government expenditure allocation, designed to ensure flexible control over the budget outturn. Conditional use of 2017 budget allocations was provided for initially in the SB/2017 Law.1

According to information provided by the DGO, the initial retentions falling on the actual expenditure of central government departments and bodied in 2017 totalled 1880 M€ - the highest figure in recent years. However, this was not the savings taken into account in SB/2017. In national accounts there were 516 M€ savings in the GG Account for 2017 under intermediate consumption, of which 427.1 M€ related to the budget reserve. Note that the budget allocations listed in the SB Law (which were approved by Parliament) are not net of retentions, unlike in the tables published in the SB Report which include the GG Account for 2017. 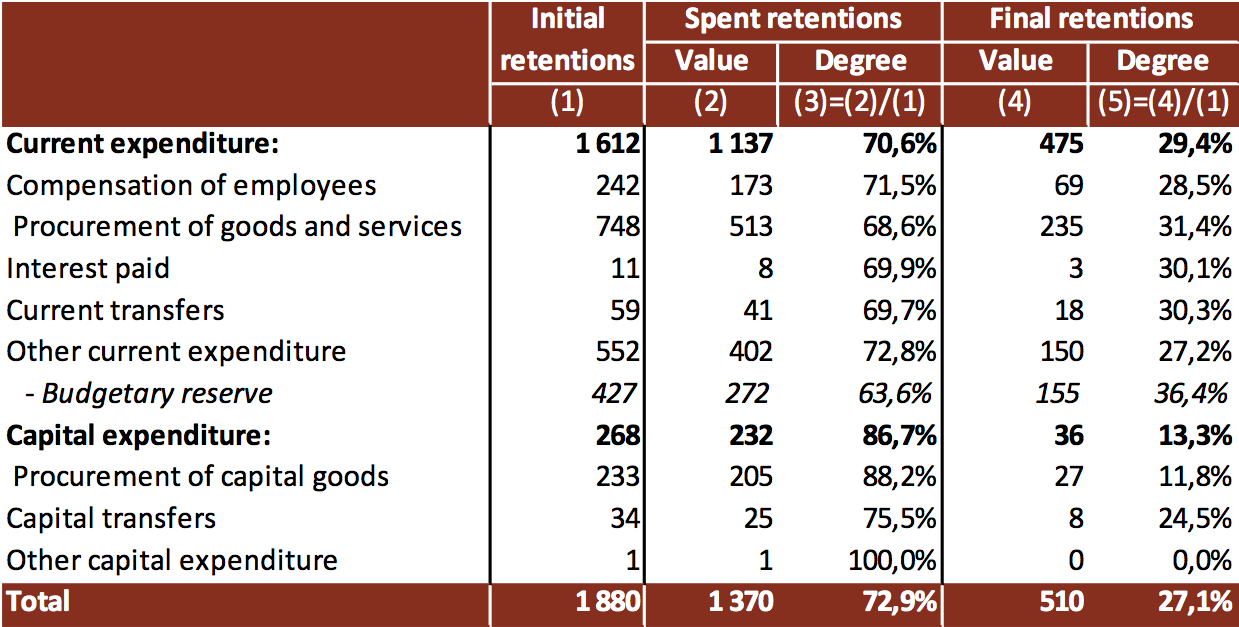 Source: DGO (initial retentions) and SIGO. CFP calculations. | Notes: not including financial assets or liabilities; not including reflexive retentions that impact on SB budget transfers to entities that are financially independent; retentions impacting on “other current expenditure” include the budget reserve.

Given that in the GG Account for 2017, in both public and national accounts, there were already implicit savings of 516 M€ (from a share of the initial retentions) and that final retentions were 510 M€, it may be concluded that the permanent retentions in 2017 were practically in line with the forecast in SB/2017.

As is usually the case, most of the final retentions fell on the purchase of goods and services: 235 M€. These savings were 146.1 M€ higher than the MF estimate in the GG Account for 2017 (which was 88.9 M€). In the opposite direction, savings on “other current expenditure” (which includes the budget reserve) were 150 M€.

The budgetary reserve (laid down in article 4 of the SB/2017 Law) accounted for a retention of 2.5% of the budget for each central government budgetary programme for 2017 and totalled 433.6 M€.2 According to clarifications from the MF, the budget reserve net of retentions was 6.5 M€ which was charged to “other current expenditure”, in public accounts and to intermediate consumption, in national accounts. However, over the course of the year, 278 M€ of the budgetary reserve was employed, and so it was 272 M€ above the expenditure initially forecast for the GG Account for 2017. The budget reserve was mainly used to reinforce the budget of the Education Finance Management Institute (Instituto de Gestão Financeira da Educação): 113 M€ assigned to Basic and Secondary Education Establishments. The CFP sought clarification as to which expenditure items had been reinforced through the budgetary reserve in 2017, and the DGO replied that this analysis had not yet been finalised by the DGO to be incorporated in the 2017 State General Account report.

The provisional appropriation is another budgetary control tool, to the extent that its use may only be authorised by the Minister of Finance, in exceptional circumstances. As in recent years, the provisional appropriation for 2017 (totalling 535 M€) was fully used. Around two-thirds of this sum was used to reinforce the allocation for compensation of employees at basic and secondary education establishments (355 M€). Attention is also drawn to the allocation of resources to the NHS (108 M€, via the Central Government Health System (ACSS), so as to make good payments in arrears in this sector.

Table 3 – Reinforcements funded by the provisional appropriation in 2017 (M€) 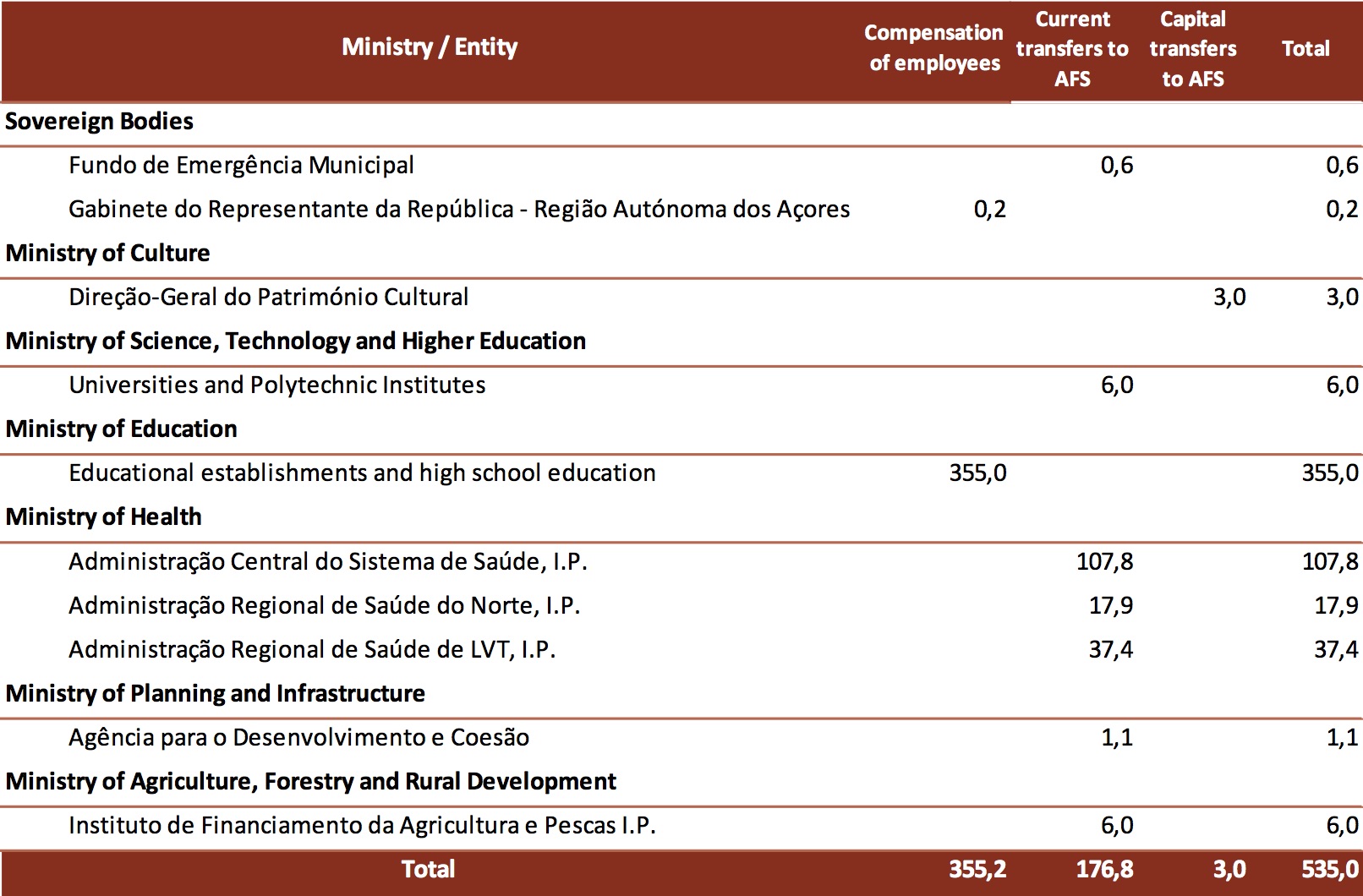 The remaining allocations centralised in the Ministry of Finance and impacting on national accounts had the following outturns: 16.9 M€ of the allocation relating to the overall national match-funding (100 M€) was used and that assigned to Portugal’s participatory budgeting (3 M€) was fully used.

Therefore, the management of the aforementioned budgetary control tools had a favourable impact compared to the SB/2017 forecast of 77 M€ on the GG budgetary balance in national accounts in 2017, due to the saving of 83 M€ on expenditure relating to the overall national public contribution and an unfavourable deviation of 6 M€ in budget retentions compared to the initial forecast.

1. Article 4 of Law no. 42/2016 of 28 December, which sets out the percentages, exceptions (including items relating to Health Service purchases), redistribution and unblocking of funds. Later, additional retentions were made covering allocations relating to compensation of employees, under the Budget Outturn Law for 2017 (article 5 of Decree-Law no. 25/2017 of 3 March).

2. Institutions belonging to the NHS and Higher Education institutions were exempted from contributing to the budget reserve, as were the RPC covered by the simplified scheme. The budget reserve calculation does not impact on expenditure financed by European funds, financial assets or liabilities, allocations relating to employees undergoing requalification and the so called specific allocations.