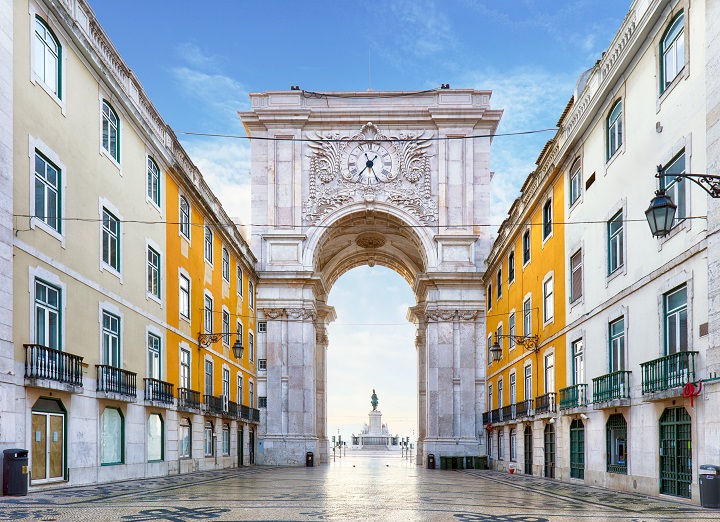 The dramatic increase in energy costs in Europe, which have been intensifying due to successive cuts in gas supply via Nord Stream 1, defines the environment of high uncertainty in which the CFP updates its projections.

Although the growth prospects for the economic activity have been surpassed in the first semester of 2022, the Portuguese economy - a small open economy - is affected not only directly, through the prices of food, energy and other commodities, but also indirectly, through the adverse shock on inflation, production and on the economic activity of its main trading partners.

Thus, the CFP’s macroeconomic scenario projects an acceleration in the real growth rate of the Portuguese economy to 6.7% in 2022 (4.9% in 2021), followed by a significant slowdown to 1.2% in 2023. In the following years, and in a no policy change scenario, real GDP growth should recover to 2.0% in 2024 and stabilise around 1.8% in the medium term. 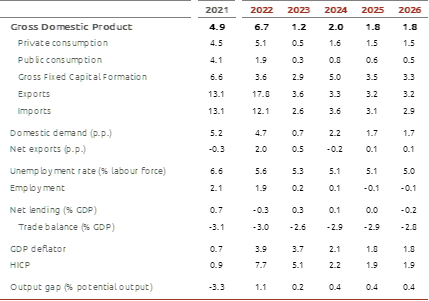 When compared to the projections presented in March, the current growth prospects for the Portuguese economy in 2022 are more robust (+1.9 p.p.). The revision is largely supported by the strong performance of exports of services and private consumption during the first half of the year, benefiting from a level of household savings still above its historical average. The projection for 2023 represents a significant downward revision of the GDP growth rate forecasted in March ( 1.6 p.p.), due to persistent inflationary pressures – as a result of the continuation of the ongoing military conflict between Ukraine and the Russian Federation and the subsistence of supply-side bottlenecks - the slowdown in external demand and the deterioration of the economy’s financing conditions over the coming years.

The labour market should mature from 2022 onwards, which should be reflected in the slowdown of the employment growth rate, from 1.9% in 2022 to 0.2% in 2023, whilst the unemployment rate should decrease to 5.6% of the labour force in 2022 and to 5.3% in the following year. In the medium term, the evolution of employment should be mainly constrained by demographic developments, and therefore it is projected that the employment growth will decelerate to figures close to zero and that the unemployment rate should stabilise at around 5.1%.

The CFP projects the intensification of inflationary pressures in 2022, anticipating an  acceleration of the inflation rate, measured by the Harmonised Index of Consumer Prices (HICP), to 7.7%. Inflation in 2022 should mainly reflect the expected dynamics of food and energy prices in international markets, the depreciation of the euro and the subsistence of supply-side bottlenecks. For the following years, the CFP forecasts a gradual deceleration of the inflation rate, to 5.1% in 2023 and down to 1.9% in the medium term, in line with the gradual fading of the inflationary pressures and progressive regularization of supply.

The materialisation of the increased inflationary pressures mentioned, but not incorporated in the previous projection exercise of the CFP conducted in March, imply a determinant change in the level, and consequently in the evolution trajectory, of some fiscal variables. This inflation phenomenon, not fully anticipated in the first quarter of the year, benefits public accounts in the short term. This is especially the case in 2022, given that economic agents do not immediately adjust their consumption and investment decisions, with benefits on tax revenue, particularly on taxes that fall on the consumption of economic agents, that is, indirect taxes.

In this context, the deficit estimate for 2022 was updated from 1.6% of GDP to 1.3%, reflecting the upward revision of revenue, influenced primarily by the impact of inflation on the growth of tax revenue. This estimate, which does not incorporate the impact of the Extraordinary Business Support Plan due to insufficient quantification of the annual effect, nevertheless incorporates the impact of one-off and extraordinary measures, approximately 2 p.p. of GDP higher than that known in March.

As a result of the incorporation of these measures related to the mitigation of the effect of the geopolitical shock and support to household income, to which is added a higher than expected expenditure with the pandemic, considering the automatic reversal that their nature obeys in a no-policy change scenario, the balance for 2023 is projected to reach a surplus of 0.1% of GDP, in line with that reached in the year prior to the pandemic. However, the projection would rather point to a deficit of 0.4% of GDP, if only a partial reversal (instead of a full reversal) of some of those measures legislated to be in force only in 2022 were allowed. In the following years, a broadly balanced fiscal position is forecast. The primary balance, which excludes the interest burden, is expected to return to positive figures already in 2022, returning to the path of primary surpluses that occurred in the five years prior to the outbreak of the pandemic crisis.

Summary of the CFP fiscal scenario (% of GDP) 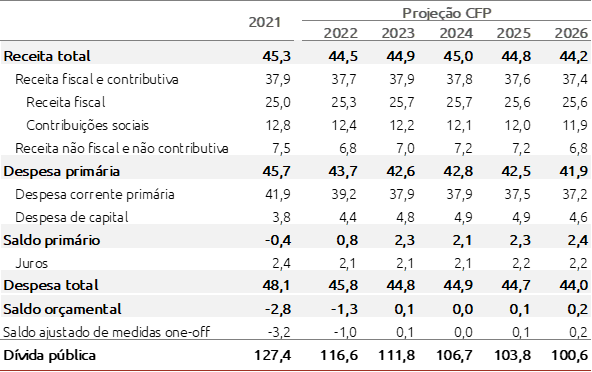 Total revenue is projected to decrease by 1.1 p.p. of GDP over the time horizon, to 44.2% of GDP in 2026.  Despite this forecast evolution, total revenue shall present a differentiated annual behaviour over the period under analysis, justified by (i) the intertemporal profile of the transfers received relative to the RRP and structural funds, as well as by (ii) the projected GDP trajectory.

Public expenditure is expected to decrease as a share of nominal GDP between 2022 and 2026, from 45.8% of GDP to 44%. This reduction reflects the downward dynamic of the relative weight of current primary expenditure and interest charges, since capital expenditure should increase its weight in GDP. It should be noted that in 2023, the reduction projected for current primary expenditure is determined not only by the macroeconomic framework implicit in the fiscal scenario, but above all, by the reversal of (i) the emergency measures caused by the pandemic effect; (ii) the measures to mitigate the geopolitical shock and (iii) the measures to support household income and lasting until the end of the year.

As in the previous report, the current macroeconomic scenario is  characterized by a high degree of uncertainty, with predominantly external risks, which point downwards for the growth of economic activity and upwards for inflation. In spite  of the fact that the current scenario already incorporates some of the effects associated with the ongoing military conflict between the Russian Federation and Ukraine, one cannot rule out the possibility of a complete interruption of the supply of energy goods by Russia to Europe, which would lead to an increase of inflationary pressures and would penalise the real growth of the Portuguese economy and  of its main trading partners. Moreover, inflationary pressures could be further aggravated in a context of: (i) subsistence or reinforcement of COVID-zero measures in China, which would extend supply and distribution chain bottlenecks; and (ii) headline inflation spilling over to core inflation.

The materialisation of higher inflation levels may lead to a faster normalisation of the monetary policy by the ECB, deteriorating financing conditions - with more severe consequences for Portugal due to the high indebtedness levels of households and firms.
The environment of high uncertainty, strong inflationary pressures in energy commodities and the possibility of a recession in Portugal's main trading partners also represent significant downside risks to the tourism sector, one of the main drivers of the recovery of the Portuguese economy following the COVID-19 pandemic. Namely, the increase in energy commodity prices could lead to an increase in the transportation costs and reduce the disposable income in the countries of origin, which could dampen global demand for international tourism.

Finally, it is also important to mention the downward risk associated with the execution of the RRP. Although the current scenario already considers an execution rate below 100%, given the delays and the low execution verified to date, the possibility of additional delays cannot be ruled out, which impact in real terms could be more severe in a context of increasing investment prices.

On the fiscal side, it cannot be excluded that the government may have to come up with new measures in response to the energy crisis and price increases. The possible emergence of new coronavirus variants may require an extension of the deadline of some COVID-19 measures or the adoption of additional measures, which would have an unfavourable impact on the budget balance.

The following downside risks to the fiscal balance are also of note: i) the possibility that, in case of debtor default, the contingent liabilities related to the State-guaranteed credit lines may materialise in higher expenditure than that estimated by the MF and incorporated in the CFP projection; ii) the possibility that the impact in national accounts arising from the financial support to TAP may be higher than that considered for 2022 and/or that additional support may be granted in the coming years; iii) the possible use of the remaining amount of 485 M€ under the Novo Banco Contingent Capitalisation Agreement; iv) the fiscal pressures on current primary expenditure in the coming years related to pensions and the claims of private partners under PPP projects.